Talking to the Wise is the work(delivered) of Chinese ceramist Huang Zhiwei who participated in the 9th China Changchun International Ceramic Symposium in 2020.

The work is made of pottery with the specification which is 23×12×31cm. With the combination of realism and romanticism, the artist creates the images of Confucius and Socrates, two ancient wise men in the East and the West; it shows them getting together and talking about the universe and the way to govern the world.

Confucius (551-479 BC), who lived during the Spring and Autumn Period (770-476 BC) when the society was undergoing drastic changes, was a great Chinese thinker and educator, the founder of Confucianism, and an outstanding representative of Eastern thought and ideas.

Socrates (469-399 BC), who lived in the heyday of ancient Greece, was the founder of Western philosophy. He and his student Plato, and Plato’s student Aristotle are called the “Three Sages of Greece”.

The work breaks the boundaries of time and space and interprets a story of the collision and fusion of Eastern and Western ideas and concepts. Rarely can two philosophers get together, it is bound to consult and learn from each other.

As a young brother, Socrates first pointed to the sky and said, “The situation is unpredictable and impermanent everywhere; eternity can only be found from people themselves.”

Confucius nodded slightly and said: “The laws of nature are nothing more than Yin and Yang, back to Yin and face to Yang. You are in me, and I am in you, endlessly and all over again.”

Socrates also said: “When the flood comes, the omnipotent God will send Gaia (the God of the Earth) to build the Ark and save mankind from fire and water.”

Confucius shook his head gently: “Nature has its own way. Dealing with natural laws with governance will bring good luck, while dealing with chaos will be dangerous. The ancestor, Dayu, ruled the waters for more than ten years, passed the house three times without ever entering it and finally achieved success. It can be said that man’s will, not Heaven, decides.”

Socrates paused and said: “The world is given by God, and people should obey God’s will; the country needs more trained and ethical professionals to govern.”

After Confucius heard this, he stroked his beard: “Man stands between the heavens and the earth. No matter what you do, you must follow the principles of life. This is benevolence, righteousness, courtesy, wisdom, and faith; do not impose on others what you yourself do not desire.”

The collision will bring sparks, and the fusion is more derived from a certain tacit understanding. Through the dialogue between two sages, the work reveals the similarities and differences between the two worlds and civilizations of the East and the West. The world is inherently diverse, and we can seek common ground while reserving differences, fuse and coexist with each other to make the world more colorful.

The work is not only ingenious in conception and distinct in theme, but also unique in portraying the characters, delicate and vivid. Especially in the expression, manner, clothing, accessories, hair shape, beard and hand-held items, it embodies the different cultural traditions and personality characteristics of the East and the west, which can be regarded as a masterpiece. 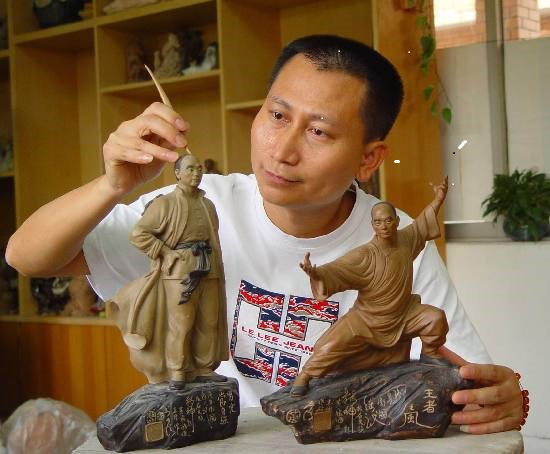